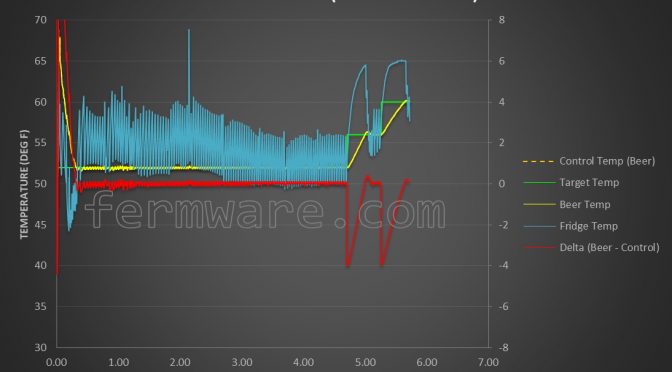 Once one has decided to install a temperature controller on their fermentation chamber, one of the first questions is where to place the temperature sensor. In this post, I’ll show the results of 3 identical beers fermented using 3 different configurations.

Just the time to read this article and implement your chosen solution.

A recurring question I see on various social platforms is “where do I place the temperature probe? I often see a variety of answers, with each person claiming to be right or saying it doesn’t matter. Typically the choices for probe placement are:

I have seen other tests where a temperature probe is just used to control the temperature of a mass of water. This is good information, but it only tells part of the story.

If you enjoy this post, please consider supporting this site by clicking on and purchasing products through the affiliate links in this post and on this website.

It depends on your decision after reading this article

Three different fermentation chambers were used, all of which used the exact same wort, with the exact same yeast. The recipe was an Oktoberfest with an OG of 1.054 and the yeast was a slurry of Wyeast 2206 from a previous batch. Each wort started with a temperature around 65 degF so that one could assess the performance of each control method in rapidly cooling wort. My target fermentation temperature of the beer was 52 degF and this was done in my garage in September in Indiana.

The fermentation controller was based on the BrewPiLess, which is a derivative of the BrewPi controller. I like this setup, because it doesn’t require both a Raspberry Pi and an Arduino. All it requires for the controller (as of now) is a much less expensive ESP8266 / ESP-12E or a Wemos D1, plus the temperature sensors and whatever power relay you want to use. It can be used as a “dual-stage” controller, meaning that it will control a heating and cooling device for your fermentation chamber.

The standard BrewPiLess setup allows for 3 temperature sensors.  I have my controllers set up to use all 3.  The standard sensors would be:

With the BrewPi/BrewPiLess setup, there are a few different control options. You basically set your desired temperature and then determine what sensor in the setup will be used to maintain this temperature.

The fermentation chamber will be cycled so that the target temperature of the chamber will be driven by the sensor labeled “beer”.  This is the control method I used for all 3 configurations.

The fermentation chamber will be cycled so that the target temperature of the chamber will be driven by the sensor labeled “chamber”.  I did not use this control method at all.  I would only recommend this method for a kegerator/keezer.

The great thing about the BrewPiLess setup, is that you can log data locally, or in my case, log the temperature data to a cloud based service. In my setup, I logged to Thingspeak.com. I logged every minute during the test, which was required to pick up on temperature changes and responses during each power cycle of the refrigerator. For normal fermentations, I log every 10 minutes.  This data would then be used to compare target temperatures to the actual temperature of the fermenting beer. The table below summarizes the various control methods and probe placement that were used in the three fermentation chambers.

I’ve tried to color code the pictures of the setups similar to the results charts shown later. 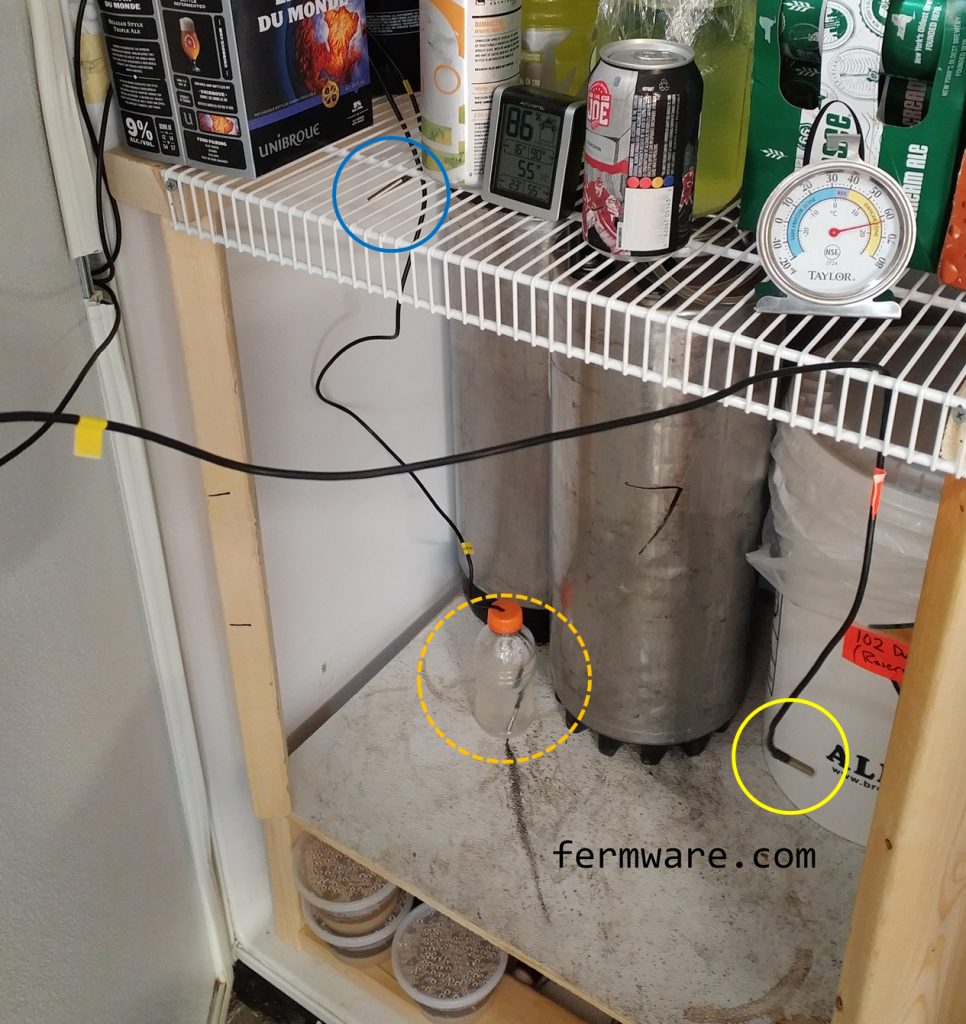 This setup is what we call at our house, the “Lagering Fridge”.  The construction was highlighted in my series of posts Refrigerator Conversion to Kegerator 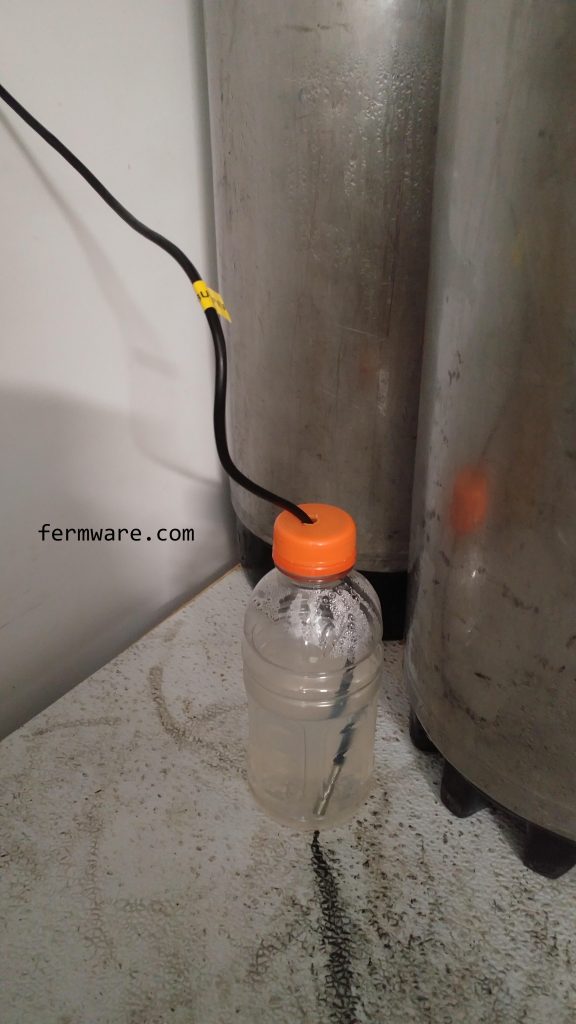 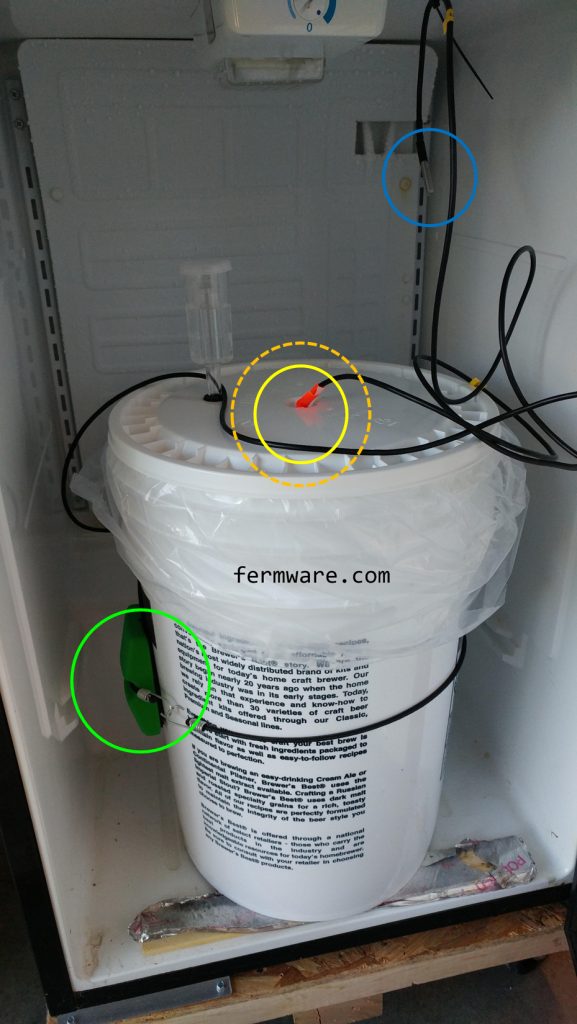 This is the theoretical best method as the temperature controller is controlling to the actual beer temp.  This is in a converted dorm fridge I use as a lagering chamber.  I placed the temperature probe midway back in the fridge so that it’s between the cooling element and the door. 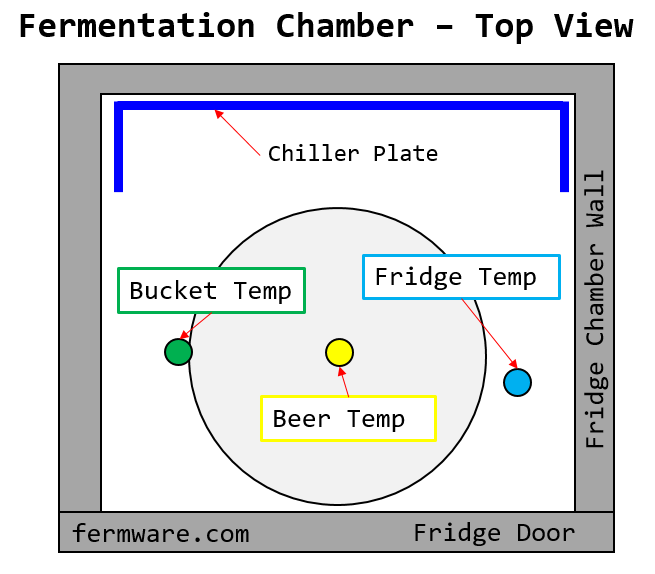 Here is a top view diagram of where the sensors were positioned in the last 2 configurations. 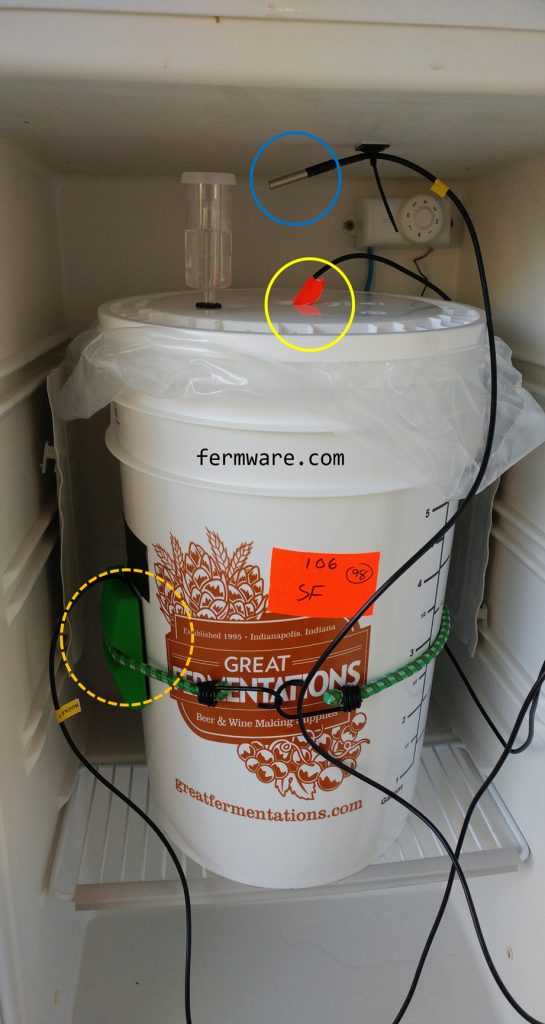 This is basically the same setup as Probe in Beer, but in a different fridge (same size fridge) and obviously a different control method.  This method in use is the easiest in terms of not having to do much extra to set up, since you are simply placing the temperature probe on the outside of the fermenter.

Fortunately, each of the three methods provided distinctly different responses, which enabled me to show that there are differences in how accurately each method controls the temperature of a fermenting beer. I’ll start with what I would consider the poorest control method. I would like to point out that once I started the diacytl (temperature ramp up)rest period, all of the methods showed a larger negative (-4 to -7 degF) delta due to the fact that there was not a forced warm up of the wort, but rather a passive warm up due to internal fermentation heat and ambient heat outside of the fermentation chamber.

Using this method, the fridge and beer temp are measured in addition to the control temp, which was the buffer. You can see in the chart a bit of wonkyness at the beginning, where in my attempt to be clever, I mislabeled the sensors and had them in the wrong locations. I fixed it within a few hours and it did not affect my interpretation of the final results. 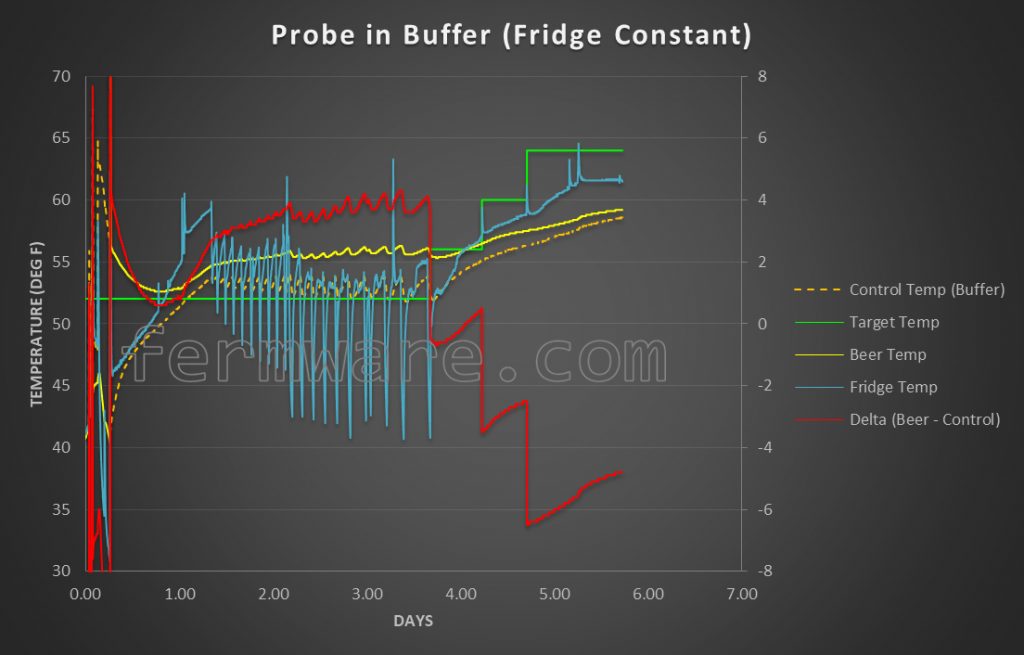 During the chilling phase, this method shows that it takes nearly 15 hours for the wort to chill from 65 degF to below 53 degF. This would be explained by the fact that the buffer was less than 16 oz of starsan water versus 5 gallons of wort and it reached the setpoint temperature much sooner than the the uncontrolled fermentation bucket would.

For the chill down phase, it took 6.8 hours for the wort temp to go from 65 degF to below 53 degF using this control method. Barely slower than the probe on bucket method, so we could potentially call this within capability of the refrigerator. I could do the math on the amount of energy or heat pulled from the air inside the fridge, but I’m not going to nerd out that much. 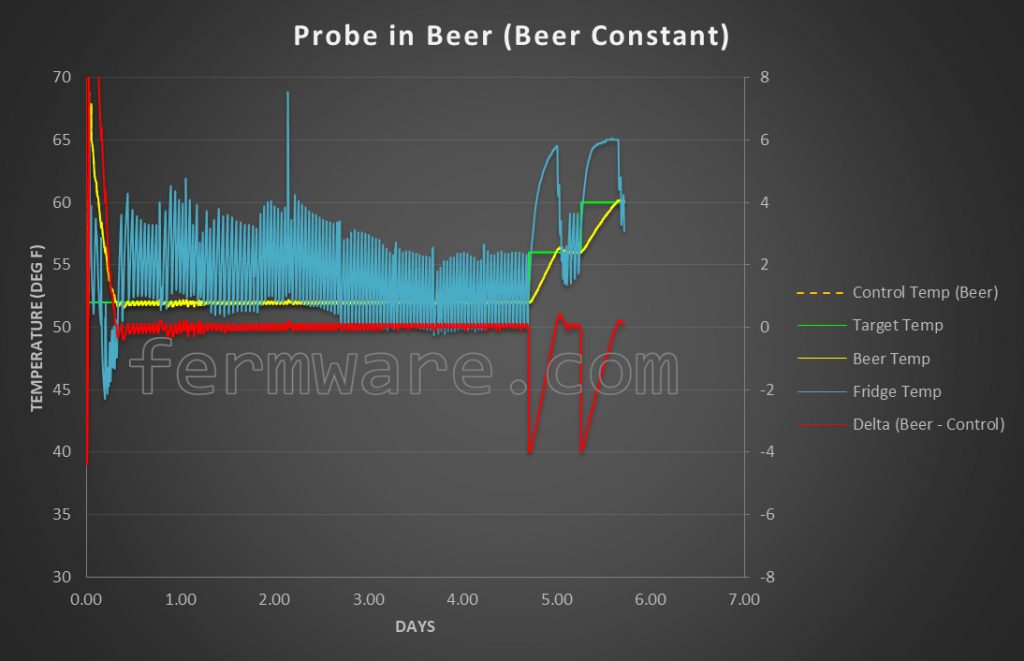 For the remainder of the initial fermentation period, the temperature of the beer was dead on target. From looking at the data, the moving peak-to-peak temperature swing of the refrigerator was much larger using this control method than the probe on bucket control method.

The overall result here is not what I would have expected. I would have assumed that the actual fermenting beer temperature would have been warmer than the target temperature (controlled by the outside of the fermenter), but what the data showed is that it was the complete opposite, however small (within 1 degF). 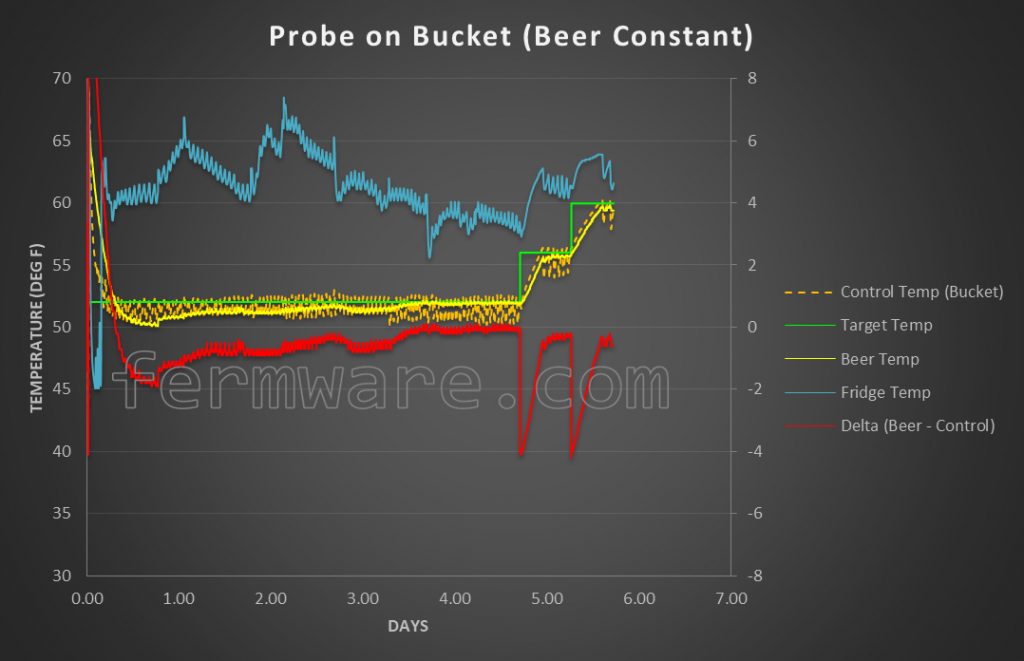 It did take 6.5 hours for the wort temp to go from 65 degF to below 53 degF using this control method. At first the temperature controller overshot and took the wort to 2 degF below the setpoint, then seemed to settle in around 1 degF or less lower than the setpoint for the remainder of the initial fermentation period.

Having looked at the actual data, here are my opinions on the pros/cons of each method

Pros: nothing to attach to your fermentation vessel
Cons: least accurate method

Pros: most accurate method
Cons: highest risk of infection of the 3 methods

Pros: not much extra equipment/setup for this method and less risk for infection
Cons: middle of the road on accuracy

Astute readers will notice that in the Probe in Beer and Probe on Bucket configurations, the Fridge Temperature was above that of the beer.  This does not make sense, right?  One has to understand that the “Fridge” temp sensor was only reporting what that sensor was reading and not necessarily the actual temperature of the fridge.  It’s entirely possible that at the top of the fridge where the sensor was mounted, it could have been warmer than the rest of the fridge, presumably due to heat ingress to the refrigeration chamber.

I’m not about to launch another blog post about fermentation chamber thermodynamics.  I could, but I don’t think it will serve a majority of the homebrew community.

If you are in the case where you need to raise the temperature of the fermentation above ambient, I would propose that the method of attaching the probe to the outside of the fermenter would probably still be sufficient. However, you should be careful to insulate the temperature probe from the heat source. If you are using a heat wrap, definitely don’t place the probe right on the heat wrap, as the controller will most likely cycle on and off fairly often and either fail prematurely or not get to the desired fermentation temperature.

If you decide that attaching a temperature probe to the side of your fermenter is impractical, I recommend placing the probe in a location that will not be in the direct path of the cold air from a fan, cooling source or right next to the door.

Finally above all else, I would try to place some sort of insulation on the outside of the probe, so that the probe is receiving most of it’s measurement from the heat exiting the fermenter walls. Suggested ideas in varying levels of effectiveness would be a towel, bubble wrap, actual insulation, tape, etc.

If your chosen approach is a thermowell or placing the probe directly in the fermenting beer, there are many options out there. I would just be sure to make sure you have a good seal where the probe cable enters the fermenter. If not, you’ll have a nice place for unwanted bugs to make their way in.

As shown, the most accurate method is to place the temperature probe in the fermenting beer. However it is up to the reader to determine what suits them better.

I personally have taken the stance that putting a probe into the fermenting beer is one more possible source of infection and yet another thing that I have to clean. I will accept the few degrees difference between target and actual and make judgement calls with each batch on how aggressive I want to be on the over/under on my setpoint from target.

I also take the approach that if your target was 50 degF and your fermenting beer remains at 48 or 52 degF, I do not think the end product will be affected enough to make any realistic difference.