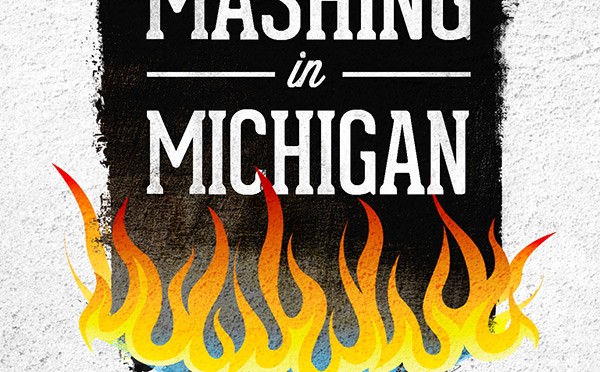 Of course having access to beer samples all day is cool, but only a true beer geek can appreciate the variety and depth of the seminars put on.  I had to plan out how I was going to make it to everything I wanted to see, but there were at times, four seminars in the same time slot.

Missed my first post on my thoughts of the evening events?  Go back to the beginning..

Fortunately, one of the perks of being an AHA member is that the AHA posts the seminar material online so you can read up on what you missed later.  Even if you didn’t make it to NHC, this is an awesome resource.  There were plenty that I didn’t get to go to, but you can’t be everywhere at the same time.

Here is a recap of the seminars I attended:

Founders is one of my favorite breweries, so it was cool to hear from the men behind the curtain. We were a bit late, but still got to hear enough of the info. I was also grateful for them sharing the recipe for the Oak Aged Rye IPA brewed just for NHC. I’m not a huge hop head, but Rye IPA’s are one of my favorite varieties. I prefer my Rye IPA’s to be higher than normal on the rye and lower than normal on the IBU’s, so I didn’t find the Founders version to my taste, but that’s why I brew my own. Because I can!

The Homebrewer’s Guide To Vintage Beer

I had heard Ron Pattinson on a Beersmith podcast earlier this year and it was fascinating. Some of the pictures of the old breweries were neat to see and it was interesting to see how different breweries adapted to tax laws, ingredient availability and their various systems of measurement.

My favorite type of beer to brew and drink is lagers. As Jason Oliver and Warren Haskell said in their presentation, lagers are fun because they present their own unique technical challenges. The biggest takeaway I had from the presentation was their note that on their step mashes, they immediately raise the temperature after mash in, instead of leaving it to sit at one temperature for a rest. I think I’ll try that on my next brew.

I have to say that even after listening to the seminar, I’m still of the opinion that doing a step mash is the most effort I want to put into the mash. I realize that there are other flavors that may come out of a decoction mash, but for me, I’m not trying to win awards. I may try one at some point. Never say never!

This was a very interesting experiment that Matthew took on. He had the sample beers there to try and I have to say that there should be some more investigating to this. My observations so far from what I’ve read, heard and tried are that hop usage at lower temperatures seems to provide a much smoother bitterness. The premise here is that he would take the wort through a sort of hop filter and they would never need to go into the kettle.

There was a lot discussed in this seminar before tasting, but basically what was presented were a piece of salami and a pickle coupled with two beers, Bell’s Oarsman Ale and Short’s Huma Lupa Licious.  The Oarsman is a 10 IBU, 4% ABV that has been inoculated with lactic and the Short’s is a 96 IBU, 7.7% ABV beer.  We’ll call them LOW and HIGH, so you can substitute with any similar beer.

You can try these experiments at home kids!  Try a bite of a pickle after LOW and it takes most of the taste away.  A bite of the salami before LOW causes it to essentially taste like nothing.

It was noted that the salami has that umami taste and can calm the bitterness of HIGH.  The 96 IBU’s was hard to beat, so after a bit, you actually feel that bitterness come back.  The pickle also calmed the bitterness.

The point was that what you are eating with your beer can influence how you interpret the taste of the beer.

Sensory Evaluation: Methods to Improve Your Palate and Vocabulary

This is something I’m not quite good at. I don’t add a lot to my explanation of things. To me the color is pink. To someone else, it is salmon. When I taste a beer that I think is good, I just know it and can’t necessarily explain why. This seminar got me at least thinking of how to explain what I am tasting in a more descriptive way.

I’ll be breaking my thoughts into a few posts:

Want to hear my thoughts on our first trip to the 2014 National Homebrewers Conference?  Keep reading. 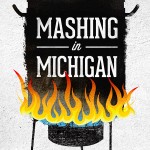 We always do a long weekend trip somewhere each summer that is typically within driving distance from our home on the northeast side of Indianapolis.  I’m always looking for ways to incorporate beer into that trip.  I somehow tricked my wife into coming with me by telling her it would be our weekend getaway for the summer.  One of the things that did help get her excited was reading letter to the editor from the wife of a homebrewer in the November/December 2013 Issue of Zymurgy that talked about how it was cool when women attend NHC.

This was my first realistic chance to attend NHC, since I’ve started brewing.  Although a bit pricey from the outside, I can say for a true beer geek, it is worth the cost of admission.  I’m just going to give a review of our trip from a newbie’s perspective and try to keep it as short as possible.

I’ll start with the evening events, then the seminars, the equipment and then some other highlights. 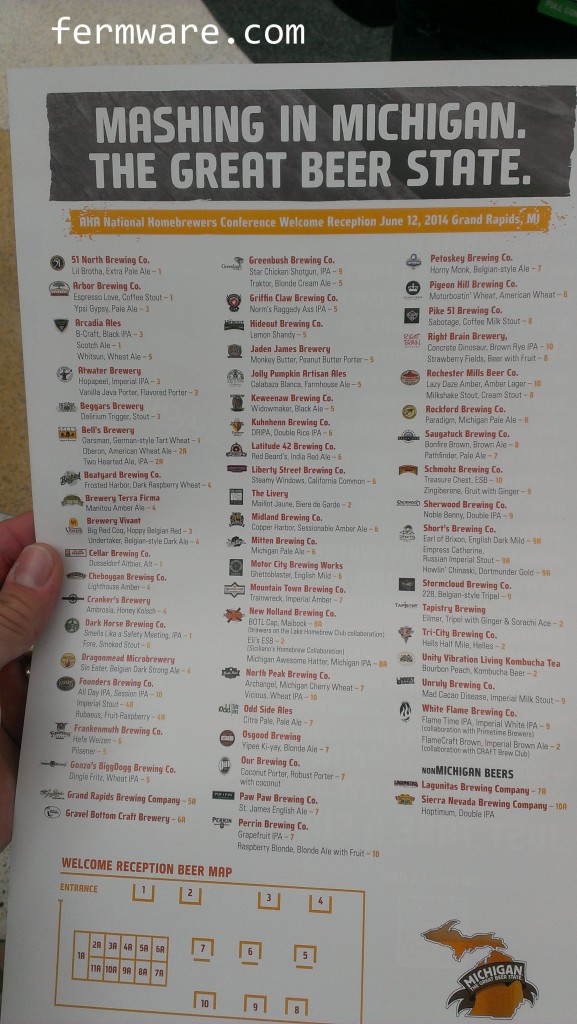 Overall, we were disappointed in the welcome reception for two reasons.

One, those serving the beer were merely employees of the convention hall and couldn’t answer anything about the beers they were serving.  Perhaps there is a good reason for it, but it would have been nice if each beer served had representation from the brewery that made it.  At a minimum, it would have been helpful for each beer to have an explanation beyond just a name and type.

Two, honestly, I was a bit disappointed in the offerings.  Nothing really blew me away.

It was cool that almost all the breweries represented were from Michigan, but again, no representation.  And that’s all I’ve got to say about that! 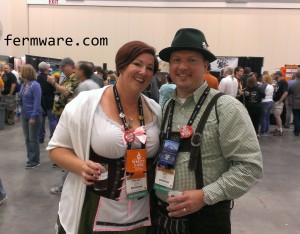 Ok, so as disappointed as we were in the welcome reception, we loved Club Night.  Almost everything I tried was spectacular or was at least something I had never before tasted.  Variations on mead, a Braggot, Kombucha and some other interesting twists.  We only made it to about a third of the booths, because we were having such a good time talking to the brewers, meeting new people and trying the beer.  Before we knew it, the lights were dimming and we all reluctantly (but politely) vacated the premises. 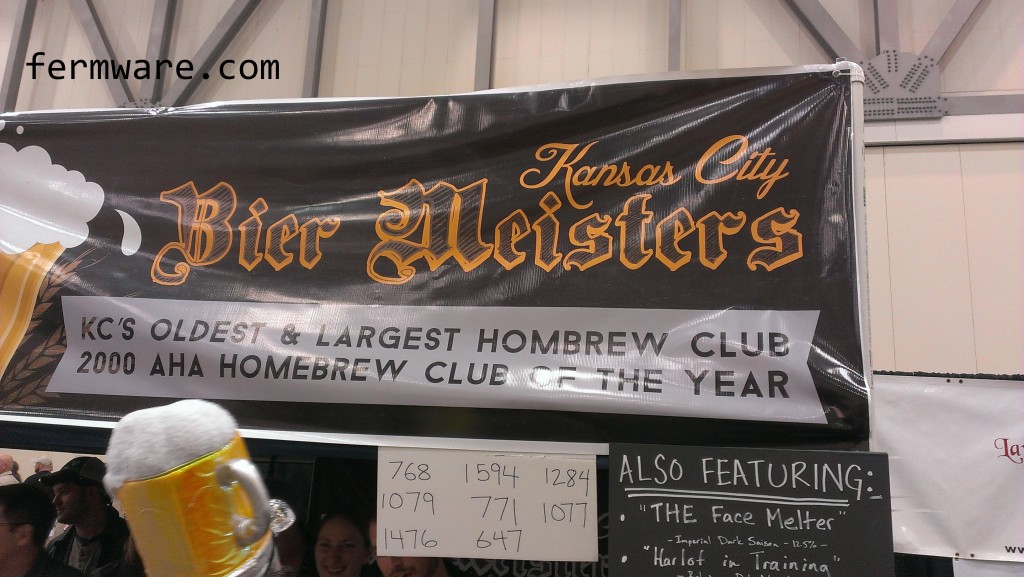 We also had a nice long conversation with a recently engaged couple from Kansas City.  They were from the Kansas City Bier Meisters.  The women (Amanda) was a like minded engineer and she had an excellent beer on tap called Face Melter (Imperial Dark Saison).  And yes it was!

I heard it was great, but being a dad is kind of a big deal to me, so we packed up the mini van and headed home so we could get back in time to see our kids again and be well rested for the Father’s Day activities the next day.

I’ll be breaking my thoughts into a few posts: